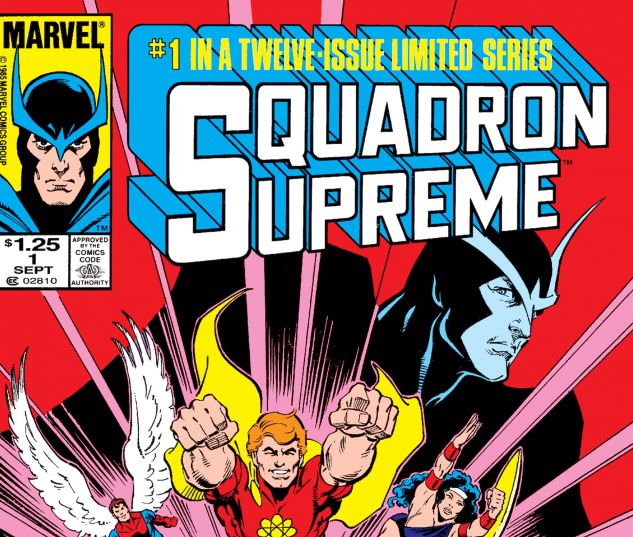 In 1985 Mark Gruenwald wrote Squadron Supreme a 12 issue limited series starring the titular Squadron Supreme on an alternate Earth, Earth 712. On this Earth Kyle Richmond, Nighthawk, was the president of America when he was mind controlled and took over the Earth. He and the rest of the Squadron are returned to normal but the world is in ruin. Hyperion decides to make Earth into a Utopia and solve all of the world’s problems by focusing on issues like violence, famine and poverty. Nighthawk opposes this plan and disappears from the team as they unmask and announce their plan to the world. Can even the world’s greatest superheroes reform the planet or will they tear themselves apart?

Squadron Supreme is a very interesting, mature look at a superhero story. It raises a lot of moral questions and the heroes of the story do questionable things. The Squadron kill, brainwash, rape and can barely get along but in the end they’re trying to make things better. There’s a lot of characters as they are based on DC’s Justice League but they all get enough focus or play some role in the story. It’s a twelve issue series so there’s a lot of time for Gruenwald to build up background events like Nighthawk planning to stop the Squadron and when things are about to completely implode you can feel the suspense and tension. The climax of the story is a giant battle where casualties mount on both sides and thanks to the nature of this alternative universe anybody can die.

This series has a lot of cool characters that are all flawed in some way but they’re still interesting to read about. I prefer DC over Marvel anyway so reading knock offs of their characters makes this series more interesting to me. Doctor Spectrum, Golden Archer and Tom Thumb were the best characters to me as they all have flaws and have to make moral decisions that are pretty awful. A lot of scenes in this series are pretty dark as a lot of the characters die of things like cancer or in accidents. My only criticism would have to be how it can be pretty wordy and that it’s a long read because it starts slowly.

What would you do if the world’s greatest hero became it’s greatest villain? That’s the question asked by Mark Waid and Peter Krause’s Irredeemable, a comic premiering in 2009 that wrapped up in 2012 after 37 issues. The Plutonian, Earth’s mightiest hero, one day just snaps. He lobotomizes his kid sidekick, destroys his own home city of Sky City, and kills multiple superheroes. The only ones left to stop him are the remaining superheroes, the Paradigm.

Coming out 4 years before a similar comic, Injustice, Irredeemable brings us the story about a Superman who couldn’t take the pressure of being the world’s greatest hero. The very first scene of the comic sets the tone as Plutonian vaporizes a fellow hero and his family with no remorse. All the other members of the Paradigm fear him and can only watch as he wipes out an entire country. The Plutonian is like a force and his unpredictability and power make for an interesting villain. As the scene in the supervillain hideout shows, he’s not just super strong, he’s super smart. The flashbacks to his hero days really bring you in and make you wonder exactly why he flipped out. This volume doesn’t give you those answers but it does tell you that Plutonian didn’t have a perfect record before he finally snapped.

This story follows the heroes as they try and figure out what happened to the Plutonian and try to survive against his onslaught. A lot of new characters are introduced here and Mark Waid uses familiar character tropes to make them easier to relate to and understand, like Hickman did in Invincible. There’s not a lot of time to build in character personalities as it is only 4 issues and there’s a lot more going on.

One thing that makes this comic stand out is Peter Krause’s art. This comic is very dark and Krause brings that darkness with heavy shadows and dull colors. It makes a good contrast to the flashback scenes where everything is bright and colorful.

Irredeemable is an interesting comic that sets up a lot of great stuff in the future where we get a dark, depressing look at a world that lost its Superman.