The Creeping Terror is a 1964 horror movie about an alien landing on Earth, where it starts eating the slow and the stupid. Our main character is Martin, a deputy, who becomes sheriff when the monster eats the sheriff. I use “main character” lightly because the real star here is the narrator, who narrates 90% of the movie. Either they never recorded audio because it was cheaper or it was lost. The movie doesn’t lack sound however, the same song repeats throughout the 76 minute runtime.

It looks like I’m not talking about the plot but I already covered it all in that first sentence. This is mostly just me putting a bullet in the back of this movie’s head. The monster is this shag carpet with a face like the Flying Spaghetti Monster. It has a giant maw that people just climb into while screeching with almost no emotion. No emotion describes all the acting, which is mostly body language because of the narrator.

This movie follows ridiculous logic where guns don’t kill the monster but a grenade does. Someone attacks it with a guitar but it bounces off of its hide or whatever the creature is supposed to have. The soldiers fighting it all bunch up like they’re in the Civil War and manage to get eaten. This movie is just unwatchable.

Foreword: The Creature Week will be extended until this Thursday because of an unexpected Internet break.

Horror High is a 1974 horror movie about a nerd named Vernon who uses some science formula to turn himself into a monster. Then he starts going around his school killing people at night while the cop, played by Austin Stoker, tries to catch the killer. Like Snowbeast this movie’s plot is the plot of something else, while last time it was Jaws this time it’s Dr. Jekyll and Mr. Hyde. The movie is even shown during the opening credits scene, justified as it is an English class they are in. 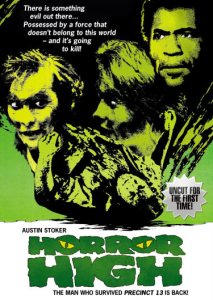 Vernon, played by Pat Cardi, is trying to make the formula to buff up his guinea pig for some reason when the janitor and his cat come in and start to threaten him. The next day the cat and guinea pig are both found dead and the janitor freaks out and starts attacking Vernon by making him drink the formula. This mutates him, and by “mutate” I mean he starts curling up his hands and growling, and he drowns the janitor in some chemical vat that is there for some reason. He then kills his English teacher, which is foreshadowed so heavily by her having this ridiculous paper cutter on her desk. He then finishes his “spree” by killing his gym teacher by ragdolling him around the room and stomping on him with spiked cleats. Throughout the movie he is making friends with a woman named Robin who is the stereotypical jock. This culminates in him chasing her around school until the cops kill Vernon.

This movie is dumb, but so entertaining. The special effects are so cheap that all the kills will make you laugh more than terrify you, but I must admit the skull of the janitor effect looked nice. The sound effects are confusing, with a musical sting going off every time Vernon laced up his shoes. In the scene where he kills the coach a musical riff covers up the growling Vernon should be doing, and the coach asks “why are you making that noise,” implying that all the music is just Vernon singing to himself. So in the end, this movie is funnier and easier to watch than Snowbeast, but as a serious horror movie it is bad. Rating: 63%= Riff worthy.

Now Snowbeast is a made-for-television horror movie broadcast by NBC in 1977. The plot, what little there is being an 86 minute movie, is basically Jaws but at a ski resort. Skiers start disappearing around the time of the Winter Carnival so the owner (Sidney) hires Gar(Svenson), an ex-skier that looks like Gordon Ramsay with Fred from Scooby Doo’s hairstyle, to kill the Yeti and Tony (Logan) is there to keep the deaths a secret. This is in the first 20 minutes. The next hour is such a boring waste of time of: Skiing, the monster eating people (In first person view), and some love triangle between Gar, Tony, and Gar’s wife Ellen (Yvette.) But by “love triangle” I mean Tony kisses Ellen once, Gar calls him out on it and then they continue with their conversation. The movie trudges along until the climactic battle with the Yeti, where *Spoilers* Gar stabs it with a ski pole and it backs up into a cliff, all in first person so you don’t see the monster.

This movie was handicapped at the start as it has to compete with the greatest movie set on ice, Cool Runnings. The Jaws analogue sums up this movie better than any other. There is no payoff for this movie, however. It’s an alright movie to watch with a friend to have a laugh. The acting is alright, but the padding and lack of payoff kills the movie. Rating: 30%=Pretty Bad

Link to the movie

Starting from today, Wednesday, June 24th to July 1st I will be reviewing 1 Creature Feature movie a day. Most of these come from the “12 Creature Features DVD” you can find at any Wal-Mart for $5 in a bin. These movies will span from the 30s up to the 2000s and the quality of these films will vary from excellent to complete garbage. These are my first real movie reviews so any advice is welcome, and I hope this will be fun.

“The Blackest Night falls from the skies,
The darkness grows as all light dies,
We crave your hearts and your demise,
By my black hand, the dead shall rise!”

“Blackest Night” was DC’s big crossover from 2009. After the Sinestro War an entire emotional spectrum of corps appeared, all signified by a color and an emotion. All these Corps must come together to stop the Blackest Night, when dead heroes and villains from around the universe are revived to feed off emotions and spread death. They are lead by a Black Hand and Scar, one of the Guardians who was injured by the Anti-Monitor. The true villain is revealed near the end, and many secrets about life and death are brought up.

Now this is exactly how a comic book event should be: the stakes are raised each issue, the plot twists and shocking moments pile up perfectly, and the ridiculously awesome moments only comics can achieve. This book really shows the expansiveness of the DCU with zombie characters like Pariah and Azrael making appearances. The art is exceptional, with colorful details on each corps member and modified costumes for the Black Lanterns. The last note is how well it sets up its tie-ins. The beginning takes place in a cemetery where most characters are seen mourning their loved ones. These characters seen here get some lines and then go off into their own book, instead of lingering around wasting time.           DC’s events are always fun, but Blackest Night is one of their finest.

There’s also a very heavy focus on character. Hal Jordan makes most of the narration and he isn’t a horrible character in these few moments. Aquaman’s wife, Mera, is the breakout character of the issue along with a newly revived Barry Allen. The Atom gets a lot of panel time where he is mourning Sue and Ralph, and his ex-wife, Jean. Scarecrow is seen a couple of times, but he is immune to the Black Lanterns as he has no fear. All of these subplots converge perfectly near the end, in a very famous scene.

And that’s the end of this film recap. The opening and ending provide some insight into Harrison’s life as he waits for a girl and orders a pizza, truly a hero for this Modern Age. A good joke at the illiteracy now a days sells the opening, and the ending twists put Shyamalan to shame. At the end of it all this movie is well made for a film debut, and I can’t wait for more in the future. Final Score: 86%= KFC Bucket