The marathon is winding down with JSA #1. I’d like to think of myself as a JSA fan. I haven’t read any of their comics but when I see characters from the series I want to read it. With this #1 I hope that this is a good jumping on point.

The issue begins with Kid Eternity, a hero with the power to bring historical figures to help him fight, being chased and eventually killed in a sewer. We then see a dream where the Sandman turns into sand and then dies in real life. At his funeral, Wildcat and Starman talk in a scene meant to introduce the JSA members. At the funeral more death and a fight breaks out. We end on a cliffhanger where another character, who says he is well known but I’ve never heard of him,  arrives.

As a #1 issue I quite enjoyed this one. They mention a lot of things that have happened previously to the characters without sounding very expository. There are a lot of characters and they all get a moment to shine in the fight scene. One odd thing is Wildcat’s dad, who would be very old based on Wildcat’s age, but they don’t mention him having some anti-age power.  He’s the supervisor for Johnny Thunder, another old guy, and Star-Spangled Kid or Stargirl as she is known now. Star is the stereotypical teenager in this and I’ve seen her written better in other books. Art is some high quality stuff and the artist or writer put in a reference to the Red Bee of all people. Overall it’s a fun read. 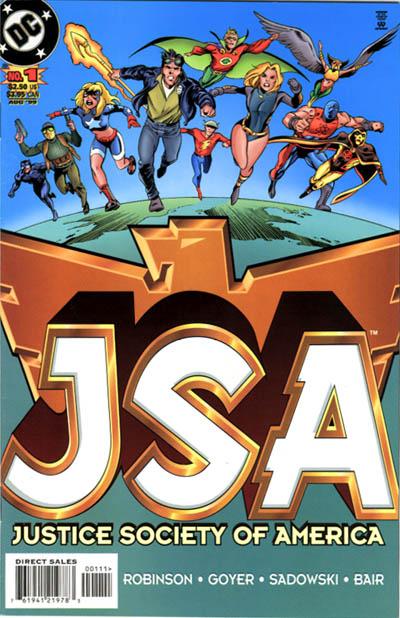