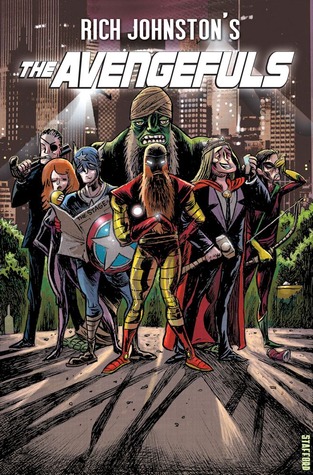 Today’s review is for The Avengefuls, a parody comic by Rich Johnston. If you don’t know who that is, he is the founder of the internet rumor mill BleedingCool. However, I don’t want to make this post just about bashing Johnston and his website. We’re going to look at a series of comics he did around 2012 to ride off the hype of the Avengers movie coming out that year. There’s 4 comics: Iron Muslim, Captain American Idol, Scienthorlogy, and The Avengefuls. Just going to talk about them all right in this one post because there’s no point in distinguishing them as I’d just say the same thing about every single issue. That point is that every single issue of this parody series is just horribly unfunny. Of course comedy is subjective and maybe there is somebody that thinks that this sort of humor is funny, but this right here didn’t work for me at all.

This series is just like one of those movies like “Disaster Movie” or “Epic Movie” where most of the jokes are just random reference humor. Captain American Idol is the biggest offender, as Gordon Ramsay and David Hasselhoff are in it for no good reason. In Scienthorlogy( I’m probably gonna spell this wrong throughout the review, but it’s a pain to type) there’s references to Natalie Portman in V for Vendetta and something about Anonymous which I had to look up to actually understand. The Avengefuls issue actually has Black Widow call Thor out on making an outdated “There’s an app for that” joke when these books reference a movie from 2005. It’s not just the reference humor that’s bad though, the other jokes are just lame. There’s a lot of lazy sex jokes, random humor, jokes trying to be adult by having the characters be racist or make fun of religion, and jokes like having characters say “exposition” over and over in the Thor comic.

The final Avengefuls issue is just the worst thing about this whole series. This whole issue just feels dated and every joke about the Avengers has been done before. Here’s a “hot take” from Rich, Hawkeye and Black Widow aren’t as cool as the other Avengers. The villain turns out to be a Hulk powered Osama Bin Laden and they must have thought that this was hilarious because almost every line has him say Osama in the place of Hulk. The ending of this issue for no reason has Obama come in and save the day. This might have been some kind of parody but I don’t understand this joke and it doesn’t even really seem like a joke.

Nothing more to say here, except I think the art overall is just bad even though the artists are talented.