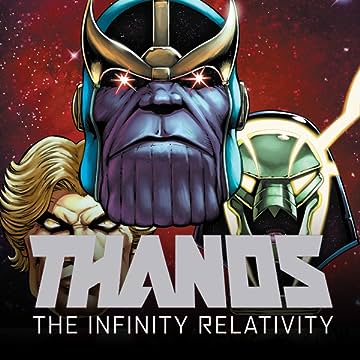 The Infinity Relativity is the second part of the new Infinity Trilogy. Let’s hope it improves over the last one. In this comic Thanos fights Annihilus, the Bug King who has his swarm of insects attacking the universe. He teams up with the Guardians of the Galaxy and Adam Warlock again to fight off Annihilus, who’s power has been increased since his appearance in Annihilation, and his Annihilation Wave. We also finally get a resolution for the events of Infinity Revelation, which barely had an ending.

So I will say Infinity Relativity improves over Revelation in a few ways. There’s more characters, like the Guardians and they get their own moments to be competent and fight the Wave. Annihilus isn’t a great villain but at least this comic has a villain unlike last time. Thanos gets some beating at least when he first faces Annihilus but even then Thanos wins their fight because he is Thanos. Getting an answer for what happened at the end of Revelation at least makes the Adam Warlock parts better as there’s an interesting development with him.

To go onto negatives I’d have to start with how it’s still a boring, predictable read just like the last one. Being the middle issue of a trilogy there is no true ending here as the story just stops on a cliffhanger. I think Revelation can stand on its own as you at least get a conclusion with Thanos and the Universal beings. Starlin is still doing double duty as writer and artist but the art is way less appealing here. There’s no neat visual tricks like last time and there’s no interesting fight scenes here, just big space battles that don’t really matter. Annihilus is a generic villain and he has this sidekick who’s obviously more than he looks but the twist of who he really isn’t revealed here even though it’s pretty easy to figure it out.

So even if this did improve on the last one a little bit it still doesn’t make it any good.