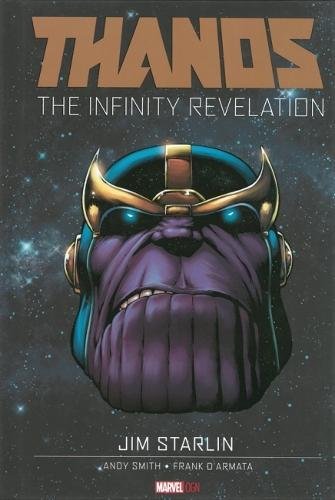 The Infinity Revelation is a Marvel Graphic novel that is the beginning of Jim Starlin’s last Infinity Trilogy. Thanos detects some imbalance in the universe; an imbalance inside of himself. After meeting with the Guardians of the Galaxy and a newly reborn Adam Warlock, Thanos discovers some Dreidel looking object. This object leads Thanos on a quest that brings him into conflict with the Annihilators and somehow they destroy another universe.

Infinity Revelation is another Jim Starlin comic where Thanos goes on a quest for power and in the end the whole universe gets wiped out. So once again we retread the same plotlines but with even more meta commentary about things that Starlin himself is guilty of doing. What really soured me on this comic was how much Starlin tried to prop up his own work while ignoring the works of other writers. In this comic there’s a few pages of Thanos history that covers basically everything I’ve reviewed for the marathon (it includes the battle with Akhenaten which is apparently non-canon so I’m not sure where this OGN fits in.) During this recap and a little before it Thanos mentions his appearance in Infinity was out of character for him and shares a similar sentiment for when he joined Annihilus in Annihilation. Another example would be the aforementioned battle with the Annihilators where Adam Warlock and Thanos take down some of the strongest cosmic superheroes with barely any effort. There’s no stakes or tension in the story because Thanos and Warlock are so much stronger and smarter than everybody else.

While I don’t have much good to say about Starlin’s writing, his art is still really good. It has a classic feel to it even with modern coloring and inking. Starlin does some interesting visual tricks like having characters change appearances between panels to show off the current imbalance in the universe. While I don’t like the purpose of the fight against the Annihilators, it’s a well done action scene. My favorite image is the two page spread where we see a world ruled by Thanos.

In the end good art doesn’t make up for a lack of quality writing and plotting. The shilling for Starlin’s pet characters kills this comic as he tries to make them the coolest characters by making everyone else weak.